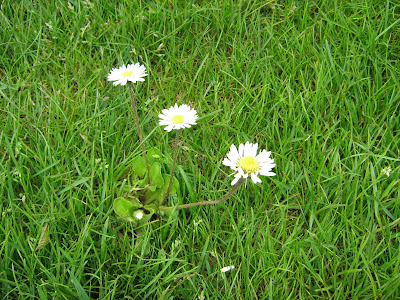 Attention to detail, dedication and infinite patience: here's just three of the hundreds of daisies Alex (one of the team of three designers) added to the Anniversary show garden's pristine turf by hand last week. Apparently one of the RHS judges tried his hardest to tug some of them out of the turf, failed and so declared they must be natural.

On Thursday the garden was open for vistors to stroll around and Alex had to cheerfully stand by as his two young children merrily ran and crawled all over the turf, picking many of the lovingly applied daisies as they went.

Update: Claire has written a piece on her blog about putting the show garden together with lots of great photos of the finished result :)
Posted by M@M aka VP ;) at 15:40