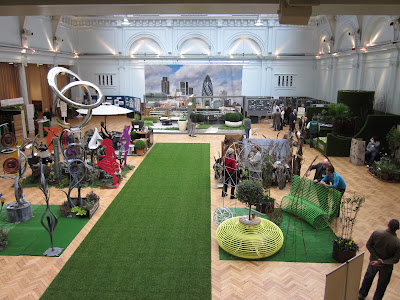 Fearful we might have lost the knack of having a good time at Malvern, we've had a couple of practice sessions this week to ensure our meeting muscles are kept in good trim. First up was the RHS London Design Show. Arabella, Lazy Trollop and Victoria have already covered what happened in great detail: I'll only add why were the major design elements of the show shoved to the back of the Lindley Hall?
Not only were there a couple of middling roof garden designs; there was a good programme of talks (luckily GirlAboutGarden was there to thoroughly cover the one given by Diarmuid Gavin), advice from top designers including megaguru John Brookes; plus displays from the Society of Garden Design and a sneak preview of some of the major show gardens at Chelsea this year. 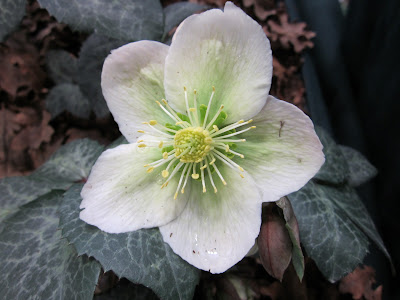 As you can see I also ensured my buying muscles were in good form too. I lost my heart to this Hellebore 'Winter Moonbeam', not only for its very large and prolific upward facing flowers, but also for its marbled foliage. I bought 2, which are due to go into a couple of very large pots either side of the steps leading down to the shed :) 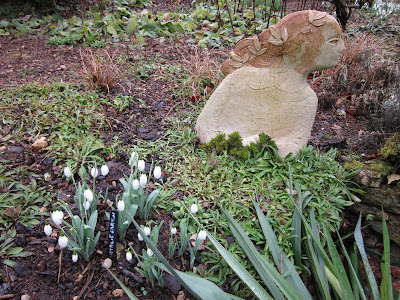 Yesterday Helen and I braved the gloomy drizzly weather to meet at the home of John Sales (former Gardens Advisor to the National Trust) for our first taste of a Women's Farm and Garden Association event. 16 of us came together to admire John's collection of 250 cultivars in his Cotswold garden. I was particularly keen to go as I avidly followed his paper trail in the National Trust archives for a couple of years when I volunteered at their HQ.
The paper impression I'd formed was a man of succinct and straightforward, no nonsense advice. However, this didn't reveal the twinkly sense of humour and hospitality we were treated to. His position as NT advisor and later consultancy work meant he's been able to indulge a passion for collecting snowdrops. Not only that he freely lets them hybridise to see if anything interesting results. If they do, they're also planted out and named after his grandchildren or given names such as 'January Sales' (because of its early flowering habit) or 'Compu Ted' (after a relative who's rather keen on computing).

Much of the collection is contained in an ancient ditch bordering the garden and here the snowdrops were on display to their best advantage: massed plantings reaching above eye level. For me it was good to see the differences between a G. plicatus cultivar (very broad leaves, usually grey-green in colour), G. elwesii (very large flowers), G. woronowii (very broad, bright green leaves) and my more familiar G. nivalis ones. We were surprised at how tall some of the latter ones were: this is because snowdrops tend to get taller with age.

The rarer snowdrops were to be found in the main garden, some in a 'bed of treasures'. Here it was easy to pick out the individual characters of some of the more precious cultivars and to compare the striking yellow ones which (shhhhh!) to my eye looked a bit sickly compared to their green counterparts. I was also able to see what my freebie G. 'Augustus' - garnered on Tuesday with my Hellebore purchase - will look like when they eventually flower. This is a plicatus cultivar which is fairly short and bulks up well. I'm glad I saw in situ it because I've now had a rethink on where I'm going to put it in the garden.

Helen and I giggled over whether our posts will look similar as we were taking pictures of the same views of the garden, so I'll leave it up to her to give you the main tour. It's safe to say that our long chat in the pub afterwards, plus the one everyone had in London on Tuesday, show we're beautifully in trim for our get together in Malvern in May :)

Our get togethers this week mean I've also had the chance to update the Attendees Page. Do I have the correct information for you?