Hot on the heels of yesterday's news update, I'm delighted Pat Atkins has sent me her guest post about her previous experiences at Malvern, whilst excitedly looking forward to her show garden for this year...
I have always known and loved the Malvern hills, as a small child I spent many an hour running around British Camp, usually in a force 8 gale. My first sight of the hills as I turn off towards Upton on Severn always makes me feel as though I am coming home.
I came late to garden designing, a career change I have never regretted. From the beginning my aim was to enter a show garden at the Malvern Show. In 2006 I finally achieved my ambition and built 'Incy Wincy Spider' sponsored by a school in Redditch. I won a bronze medal and felt very proud of myself.
However I had caught the bug, one garden wasn't enough, I had to make another, so 'All the World's a Stage' followed in 2007. Another bronze medal, although I listened to the judges feedback, tweaked the garden and entered it at Gardener's World Live the same year and won a silver. So it is worth getting that feedback. 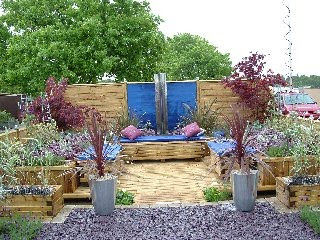 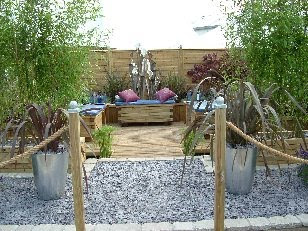 This year the bug has bitten again and 'The Owl and The Pussycat is in production. I am working with a friend, we decided to grow all the plants ourselves, foolishly choosing the coldest winter for 30 years.

We have even woven the willow boundary fencing ourselves. 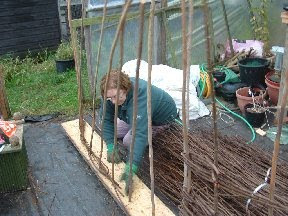 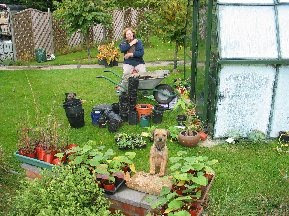 As you can see we had plenty of help with the potting on! Dogs,cats, mice nibbling plants and a large rat that dug holes in our large pots of ferns. That plus -15C, it has been a challenge. Hopefully we will have a garden and with a bit of luck it might even win a medal, but it's the excitement and friendship involved in building a garden at Malvern that is the most important thing.
If you want to know more link up to my blog or better still come and visit our garden and read the diary that we are making. Nibbles and wine will be liberally dispensed, to you as well as me. My dream to win a gold? No, I would like to be chosen as the public's favourite garden in the 2010 show!
See you at the Show.
Pat Atkins
Thanks Pat, for such a fascinating insight. I look forward to reading your blog updates (NB there's a link in the sidebar under Show People, Diary of a showgarden as well as the one above) and meeting you in May :)
Posted by M@M aka VP ;) at 08:30

Looking forward to seeing this garden, it sounds delightful.

cheerio from the Netherlands,

It's great to see the person behind a show garden and hear about their highs and lows. Stuck inside my cattle shed I don't get to see much of the show but always try and sneak out early and have a quick tour of the gardens. I'll look forward to seeing The Owl and The Pussycat - good luck Pat!

What do you think of the business of having to 'theme' your garden? Something so alien to how people think of gardens or conceive of their own?

Echoing Yolanda, we can't wait to see the delightful concept you are presenting. We already love the willow fencing. :-)
Frances from Tennessee, USA

Yolanda & Frances - glad you like the look of this - it's good to get an insider's view isn't it?

Artshades - glad this blog is allowing you to spend a bit more time outside of your shed and see what's going on in the festival. I'll make sure we all come and visit you during the show!