Malvern Memories: On the Road Again

This time, Anna shows us the delights of Hampton Court, somewhere not far from Malvern which is older than the place of the same name in London. I had the pleasure of meeting up with Helen and going round this garden with her in August last year :) 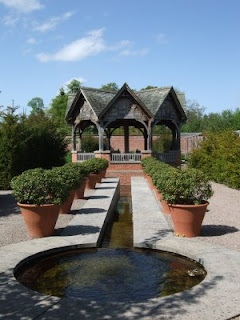 Leaving the occupants of the greenhouse to entertain themselves for a couple of days, we have just been to the Malvern Spring Gardening Show. We broke our journey down south with a stop at Hampton Court Castle in Herefordshire . I could not wait to return to the gardens there after making my first visit there last summer. It was an ideal chance to call in again and I was not disappointed. Stepping into the walled garden we both commented on the rise in temperature - oh what would I give for a walled garden ! If we ever win the lottery jackpot a walled garden would be top of my list, followed by clean sheets every day of the year. Although it is still early in the season there was still plenty of colour. We met one of the gardeners who was cutting flowers for the house as the owners were visiting for the weekend. She had plenty to choose from including alliums, tulips, valerian, lilacs, euphorbias, both real and false 'Solomon's Seal' and tellima odorata - she highly recommended the latter for its scent. 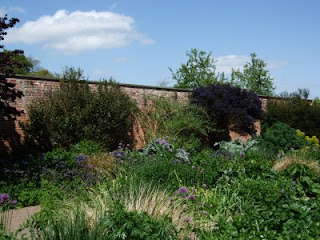 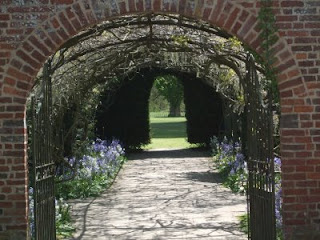 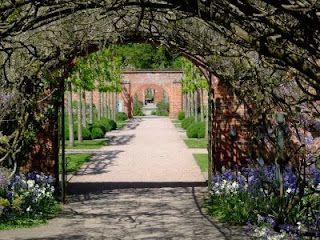 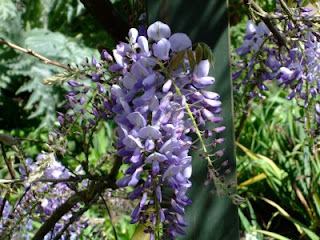 There was not much planted yet in the vegetable garden but preparations for the new season were well underway. I admired these sweet pea supports where sweet pea 'Matucana' had been planted ~ 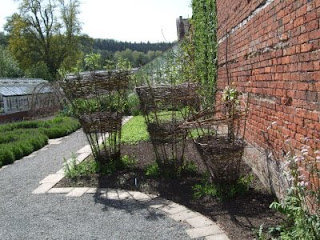 Lusted after the greenhouses ~ 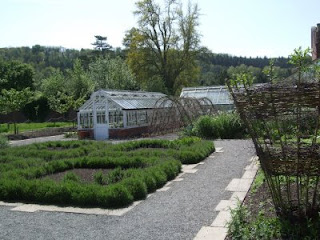 before finishing our stroll with a visit to the restaurant ~ 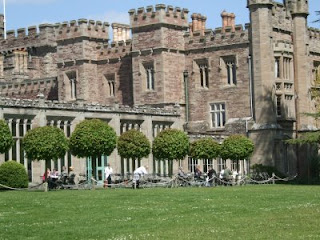 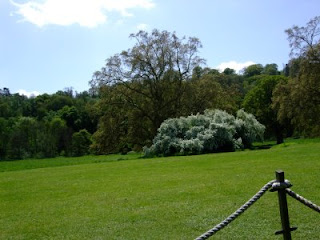 All too soon it was time to return to the camper van to continue with our journey to Malvern and the show. To be continued in my next post .......
Contents and photographs courtesy of Greentapestry.
Posted by M@M aka VP ;) at 12:00

Email ThisBlogThis!Share to TwitterShare to FacebookShare to Pinterest
Labels: Garden Visit, Memories Are Made of This, Outside

Oh to see that wisteria arbor in full glory, what a sight that must be. Everything looks so green and fresh. We long for green.
Frances

Greenseeds - welcome! I went last year too (in August) and thought the garden looked fabulous, especially the potager :)

Frances - unless the weather warms up that Wisteria will be late to bloom this year. Might be too early at the show :(