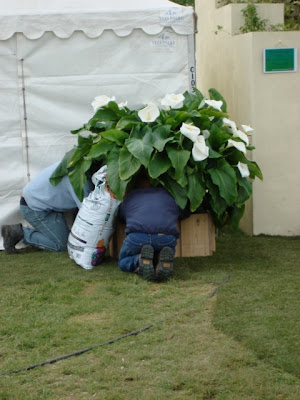 Firstly, we had the gardening contingents from Wales and The Netherlands agreeing to join us... :)
Then over the weekend excited negotiations of the kind only seen in the corridors of power such as the UN or at the signing of major international treaties resulted in...
THE YANKS ARE COMING!!!!
Yes, the first Transatlantic cultural exchange (sub classification: horticulture) will be taking place at the Malvern Spring Show. The fair southern State of Tennessee has agreed to the pilot project proposed by the Meet @ Malvern organising committee and have duly selected Frances and Gail to be their representatives. As you can see from the photograph, negotiations were of a rather sensitive nature and we have had to protect the identities of the envoys involved in the deep and far ranging discussions in case there are repercussions later.
Here's an excerpt from Frances' first e-mail following her appointment:
Gail and I are like schoolgirls, giddy and phoning and emailing each other every five minutes. We might have to bother you with questions about what to pack, footwear, raincoats, cash and/or credit cards, dress up clothes for dinners? We will try to keep it to a minimum of one email per day. :D
Here's to a truly successful global bloggers gathering :D
Picture courtesy and copyright of James Alexander Sinclair.
Posted by M@M aka VP ;) at 08:30

How great is that? Delighted to know that we will be all transatlantic and european and generally generous and exciting. So glad you are not coming to my house. I would be s******g myself. This way I can pretend my garden is ok and no one will ever know.

I can only echo what Elizabeth has said :) Great to see that we will be a true global gathering.

HA, what a riot! Love love love the photo, thanks James. Meeting you all is the highlight of this trip. I can't believe it is going to actually happen. Gail started it by saying wouldn't it be great if we could go to Malvern, just a fanstasy conversation. Thoughts started percolating and it was decided that this fantasy could become reality. We put our thinking caps on and yes, the Yanks are coming! Although in the southern US, being called a yank is not a good thing. I married one, but that is another pot of wax. Perhaps the Southern Belles are coming. HA, what a laugh! Thanks for all the kind offers of help, we will need every bit of it and hope to repay with help of our own. :-)
Frances
ps, as far as seeing your gardens, believe me when I say, our own gardens and their disarray allow us to view the gardens of others with a sympatheic eye, only seeing the best, ignoring all else.

Elizabethm - when Helen and I started this we thought we'd get 10 people max. This is beyond our wildest expectations!

Frances - you're definitely the Southern Belles. I can't wait for you and Gail to be actually here!